Recently my therapy sessions with the clinical psychologist I’ve been meeting with for nearly a year have come to an end. Admittedly at first I was too overwhelmed to even begin thinking about how I felt about the upcoming changes. I really started struggling, as unexpected changes to my usually fairly smooth home life occurred alongside changes in my psychological support and therapy.

Despite the changes in mental health services I was able to stay with my psychologist and continue with my therapy – though I was informed early on that there would be big changes during Spring/Summer 2016. Supposedly my treatment will be transferred over to Forward Thinking Birmingham soon – though at the moment I’m still very unsure of when this will be.

My sessions with my psychologist have come to an end as my psychologist has left the Trust (BSMHFT). However, I have been offered fortnightly supportive psychological reviews by one of the trust’s clinical psychologists until I am transferred over to the new service. The problem I’m currently facing is whether to allow myself to feel comfortable during these meetings, or to wait until I move over to the new service. I know this may sound silly, but it takes a lot to open up to someone – when you are discussing mental health you can at times feel very vulnerable, and it requires quite a lot of trust. Trust isn’t an issue I don’t think – I trust those at BSMHFT as my treatment there has been so fantastic, I’m just apprehensive to form new relationships and then have to move over and meet new people. It’s quite nerve-wracking, and frustrating. I guess it’s also the sense of not knowing what to expect when I do move over to Forward Thinking Birmingham.

At the moment I’m in a bit of a ‘limbo’ stage – my last psychology session was earlier this week, the same day that I stopped receiving contact from the home treatment team (though I am able to contact them). I have to wait two weeks until I meet with the new psychologist – however, this won’t be therapy – it will just be a space to touch base with my team until I move services. Fortunately I’m incredibly lucky as I have a fantastic support network where I work/study through a team of wellbeing and mental health advisers. I am also able to contact my Community Psychiatric Nurse (CPN) if needed, so despite not having sessions there is still a wealth of resources available to me in terms of support – something which I am incredibly grateful for. It’s odd as I’m used to having weekly psychology sessions – and I was terrified that I’d really struggle once these came to an end. I know it’s only been four days, but my new found freedom is apparently exciting and overwhelming all at the same time.

I think I’m currently going through that thought process (that I can imagine is usual) where I question whether I can do this alone (go cold turkey) or actually deal with all the changes in my treatment, and make the move over to the new service. It’s all confusing, and considering how intensely I was struggling last week I seem to be oddly calm at the moment.

At the moment I think I’m still trying to decide how I feel and how to deal with the current changes. 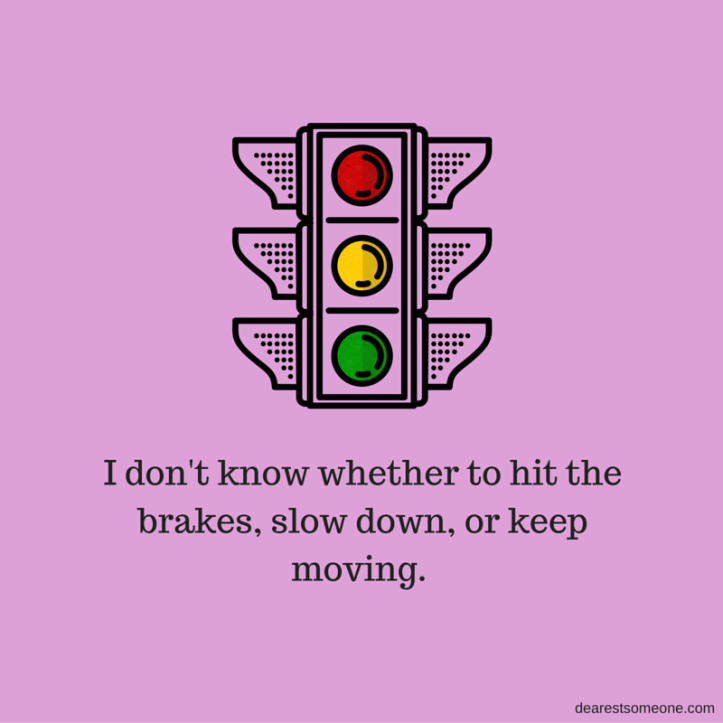