As someone who battles daily with the ups and downs of mental illness I’ve always been intrigued by whatever it is within me that keeps pushing forward, and continues the fight even when the battle doesn’t feel possible, and, most importantly, something within me keeps fighting even when I no longer want to face things.

This past week hasn’t been easy, in fact it’s certainly been one of the toughest weeks in terms of my mental health. I sort of stopped. I stopped trying – I just felt like I’d ran out of ways, reasons and drive to cope. It felt as though I had already given up, and my mind clouded over – but this time I couldn’t push my way through the blurry, dark mess that had engulfed me. This week I had to ask for and accept help. I had to be honest with myself and others – and I knew that if I wasn’t honest I wouldn’t have been safe.

I’ve had quite a few realisations this week – ones which I already knew, but didn’t actually acknowledge. My biggest, and most important realisation: people can’t read minds. We can try, we have bloody good instincts and intuition, you may know somebody incredibly well, or not at all – but at the end of the day if you are struggling and you need something if you’re as good as covering things up as I am then it’s likely that other people won’t know what it is you need.

If you want something, and you think that that something is the only thing that can support you when you are feeling vulnerable and afraid then you really do need to try and let somebody else know what it is you need.

Another thing that I’ve added to my list of personal realisations this week is that it’s okay to tell others when I am struggling. It’s okay to admit that I cannot deal with some things alone and that I need the support of others. In fact, this week I definitely contacted someone a good few times in a very brief, skip-over-the-important-points manner, but prayed that they’d pick up on how badly I needed help. I think we’ve all done that, when we’ve found it hard to admit things, and we’ve wanted others to magically know what’s going on without actually having to explain things – the problem is, when it comes to mental health sometimes you have to be pretty forward and open – and of course that can be a horribly discomforting thing to do

I’ve had quite an intense week of learning about my own mental health – but most importantly, I’ve discovered that I’m getting better at being open and honest about how I’m feeling to others. I managed to speak honestly to others this week, that led to me getting the support I needed – but, I also started being honest with myself. I tend to struggle making sense of what it is that I want and need as my mind is very good at keeping me distracted. It’s been difficult for me to know what I need, and there have been times where I’ve not know what it is that I need, but I’ve known that whatever it is that I do need I won’t be able to find without being open and honest to others. This week has been a huge, exhausting, painful learning curve. But even things such as saying yes to appointment offers, and actually turning up to those appointments have been – in my eyes- huge accomplishments. I trusted that I could go to someone for help when I really needed it – it took a while, but once I decided to stop being cryptic, and to actually be honest I was able to get the support that I so desperately needed.

To me the importance of being able to have the space to make sense of things in my own way, without feeling judged, is important, but I also know that there are times when I am unable to make sense of things. There are times when I am unable to think clearly, and articulate what I’m feeling – whether it’s anxiety preventing me from being honest, or my mind clouding over because of how distressed I am – I know that there are safe environments and people that I can talk to who will help me see things clearer – and that is so so incredibly important to me. 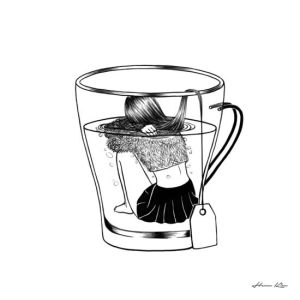 Somebody made me a cup of tea earlier this week, and though it seems silly, it was such a comforting moment. Tea is an odd thing for me – as strange as it sounds I’ve always struggled to drink tea – not because of the taste (tea is lovely) but because of what tea means to me. In the immediate aftermath of a traumatic incident it’s natural to (if you can) offer people a hot drink – after I’d experienced flash flooding when I was younger I was offered a hot drink while we were waiting for the emergency services to come and rescue us – at this point we thought we were getting airlifted to safety – so I’ve always remembered the sound of helicopters, and asking for a cup of coffee and being given a cold cup of tea. I mean, to give credit where credit is due, there was no electricity and these people were complete strangers, but for some reason that’s always stuck with me. For years I wasn’t able to drink tea – it just made me feel nauseous and anxious. However, recently I’ve discovered that tea is bloody fantastic, but still – when I was feeling incredibly overwhelmed and afraid this week I was offered and given tea, and it was such a meaningful moment for me.