I find a lot of things in relation to my mental health quite frustrating – but it’s all definitely stuff that’s focused around me and my own recovery. When others speak to me about their mental health, or well-being, or just life in general I naturally try my best to support them, give them a space to talk things through – to reflect on all aspects of what it is that’s concerning them. I often find myself helping (or at least trying to help) others to acknowledge what’s going on – from all angles. I don’t encourage people to turn a negative into a positive, but I do encourage others to consider the positive stuff too – give them something to mull over.

I think when others are being quite hard on themselves I try as best possible to help them alter this – even if it’s only slightly. But I can’t do that for myself, all compassion goes out the window when it’s my own matters in question.

I am my biggest enemy. I’m definitely the biggest antagonist in my story. Yeah, I’ve been through some pretty ‘tough’ things – which still impact me in terms of my mental health. But often I find myself getting quite annoyed at how I deal with things. I’m constantly making things worse for myself – or it feels like I am. I’ve had so many opportunities throughout the past few years to change my perspective on things, I’ve had so many opportunities to just ‘let go’ of things, and to move forward. Yet it feels like I seem to be stuck on repeat. What’s most frustrating is that I just get on with things – but I block other stuff out, I feel like there’s certain parts of my life that I’ve had no idea I’ve been avoiding until recently. I’ve been reflecting on a lot of stuff recently, and it really upsets me that I seem to have been focusing so hard on just ‘surviving’ so to say, that I feel like I’ve just ignored other parts of my life.

I can fall prey to overthinking, but it really feels like I’m not overthinking this. Others around me may be unaware of the things I avoid; they may believe that I’m not acting any different, but that’s just because of how I am around them. I worry that a lot of people just expect me to constantly be sassy, witty and generally a ‘busy’ person, but that’s just one group of people in my life. I can imagine there are others who may think that I’m lazy, or that I don’t get involved in much. Though I do think it’s natural to not act in certain ways in different contexts, for example at work it’s not possible for me to not get involved, but if I’m at home after a long day it’s easier for me to just get in bed and hideaway from things. Likewise, I’m not going to talk about the same things at work that I would with my mental health team.

I really fear others thinking that I’m incapable of doing stuff, naturally I like to be busy, I like being involved in a project, or having something productive to be a part of – so I try not to talk about certain aspects of my life to some of the people around me and I just get on with the things I enjoy.

Often I avoid having to talk openly about my own emotions and feelings, in a work context it’s different – I can share my thoughts and worries about certain projects, decisions, etc. without being afraid of being honest. Likewise, I’ll happily support others, but I struggle when it comes to my own personal experiences. I have so many wonderful people around me who care about me and support me (and thankfully are very patient with me) but even when I want to talk about things, or when I feel I need to I’ll only hint at what’s going on – sometimes that feels enough, other times it can be me quietly screaming out at someone praying that they’ll ask me more questions and let me talk. In some situations when I do talk about personal things I do find it difficult to be completely honest about everything because I’m worried about how others will respond. It feels as though me even trying to talk about things is too much of a burden for the recipient. Even if I’m talking to a mental health professional – I don’t want them to judge me (which logically I know – or hope they won’t) and I don’t want them to feel obliged to sit and listen to me. 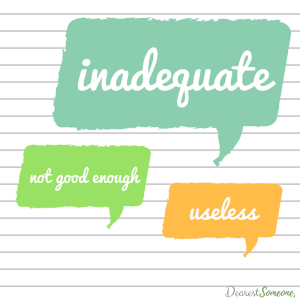 I feel that part of my fear of opening up about things is being perceived as weak, and of being inadequate. I won’t necessarily open myself up to others because I feel embarrassed, or worried that they would think I’m being ‘dramatic’ or that I need to just ‘get over things’. But that worry of being inadequate, or being too weak tends to take the lead in most aspects of my personal life. At work it’s easier to silence it, I guess as well because the work I do isn’t personal, I’m following guidelines, and regulations and if I adhere to that I’m fine – but I also feel confident in thinking outside the box, my choices are sincere, I don’t often doubt them, and I’m confident in talking about things, in supporting others, in following the rules but also in driving change. Yet in my personal life I can often find myself wanting to just avoid conversations and situations where I feel too exposed, and it’s fair easier than you’d think to just block things out.

Sometimes I actively prevent myself from having to talk to others about ‘deep’ stuff, and other times I do it without realising. I think my brain has learnt now to just automatically avoid things, or block things out – but recently I’ve acknowledged this (which was painful in itself) and I want to make small changes. I hate that I have so many wonderful people in my life, who often only get a crappy, panicked, stressed, over the top ‘happy’ version of me, I just want to be myself, to be comfortable and to fight back against the unwanted desire to avoid human contact and expression (apparently).

I think by blocking things out I’ve been trying to reduce the risk of getting hurt (by what, who knows), but ironically blocking things/people/relationships out has just left me feeling more distressed, and feeling slightly lost (and a little dilapidated, because I feel like I’ve failed in something which should be a natural skill – being open and comfortable around others).

Don’t get me wrong I don’t expect to suddenly run around telling everyone my deepest thoughts and feelings, but lately I’ve realised that I don’t really talk about stuff like that to anyone. I have friends who I’m close to, who I love so bloody much, and they are undoubtedly there for me when I need them, and I’m so grateful for them – but I am strikingly aware of things that I do avoid, and I really want to try and change that (no matter how frustratingly unnatural, awkward and weird it may feel for me).

There was an error retrieving images from Instagram. An attempt will be remade in a few minutes.

Not sure what you’d label this, but my housemate brought this home the other day and I sat happily scratching away making patterns. I think it’s called scratch art? I’d definitely recommend, it was a lovely distraction, and look how pretty it is! (Second photo is what it looked like before.) #ScratchArt #Creativity #Wellbeing #Distraction #Recovery #MentalHealth
New Year’s Eve play date. #Meow #CatsOfInstagram #Cats #OneDoesntLiveHere #NewYearsEve #Buddies #Gata #Chat #Cat #Spain #playdate
The sea always makes me feel content. 2018 has been incredibly challenging and a lot of things have made it difficult for me to get near the sea this year. I didn’t realise how much I missed it until going for lunch on the coast the other day. I couldn’t let 2018 pass without swimming in the sea. So today I jumped in (literally as it was bloody freezing, but so worth it). #Sea #Ocean #Spain #HappyHuman #EndOfYear #Blue #Denia #Wellbeing #BlueSky #NoFilter #Cold #Swim
I spent the afternoon with my parents helping out at the local animal shelter walking the dogs. It was a lovely way to spend my Boxing Day, and I had so much fun with the dogs. I wish they all had happy homes and humans to walk and love them. #Perro #Spain #AnimalShelter #BoxingDay #Protectora #Walkies #Walk #Dogs #Shelter #Doggo #Valenciana #Pego
Christmas morning. #NoFilter #Sunrise #Christmas #FelizNavidad #Spain #Holidays #Merry #Sun #Relax #Happy #December #Morning #View #Sky
Reading in the sunshine earlier today. #ChristmasEve #Relax #Rest #Recover #Sunshine #Spain #Christmas #Sun #FreshAir #bluesky
%d bloggers like this: