aaaaaaaaand breathe / (or the alternative title: Helicopters and Coffee)

I’m having a lovely time in Cornwall, I’m slightly sunburnt (like a lobster) and I’ve been reunited with the ocean so life’s good. Yet today I woke up grumpy and not willing to face the world… it was a bit of an unpleasant, unwelcome reminder that no matter where you are in the world… you cannot escape your own mind.

To be fair last night it was pretty cold, that mixed with sunburn and tiredness (from galloping around in the sea) in addition to a full tummy of awesome Westcountry pub grub left me feeling pretty knackered. I was in a good mood but I was shattered… Also, due to where our site is located in Cornwall we’re very near to two airfields (one MOD owned, the other civilian-based). It’s something that I’m used to, I’ve pretty much grown up here and also I was in the Air Training Corps for four years… I’ve even spent time living on a Harrier base yet these past few days there’s been a helicopter training sort of thing happening nearby and it’s getting to me a little…

I’m not sure if it’s part of RAF St.Mawgan, Newquay Airport or the nearby Air Ambulance/Rescue crew, to be fair that doesn’t really matter… Normally there’s a lot of helicopters buzzing around over Cornwall, and during the day (and night) it doesn’t bother me. Yet for the past few nights at around 10/11pm there’s been one helicopter flying pretty low over camp and it’s really stumped me. I don’t think it’s scared me or anything, I think it’s just the noise… it’s like a sudden surge of noise, which is pretty ferocious and seems urgent/intense.

A few months back I had a bit of a thing against helicopters (they were a bit of a trigger), helicopters or other aircraft haven’t normally bothered me… I think it’s because of recent work I’ve done around Search and Rescue crews that the noise of helicopters has been pushed back to the front of my mind. In 2004 my mother and I were caught up in a pretty severe flood in Boscastle, Cornwall in which seven helicopters were deployed to airlift people to safety… so it makes sense that helicopters get to me at times, but to be honest I’ve never really paid much attention to them in relation to my own personal feelings and needs.

I think it’s possible (very possible) that I feel weird for having such a lovely time down here in Cornwall when for me the past few months have been ridiculously intense, I’ve struggled a lot in the previous months and I think my brain is just trying to pick things to stress about? I’m not sure if that’s a thing, or if that’s even what is happening – but I woke up real grumpy today and I’m blaming that helicopter haha (though… how cool would it be to be a helicopter pilot?!)

Anyway… I was grumpy but the sun and some croissants cheered me up alongside my dear friend coffee. (Hooray for coffee). I’m having a lovely time… today I had to remind myself that it’s okay to have crappy days… but I also reminded myself that I’m in Cornwall, and in Cornwall there’s plenty of fresh air… there’s plenty of space to breathe and just be (but make sure you put suncream on.) 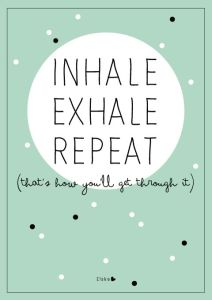 Also… note to self: there ain’t nothing wrong with helicopters.